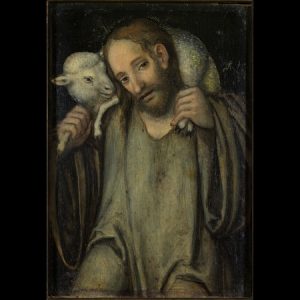 There was a story I stumbled upon in a German newspaper a few weeks ago. 67 sheep died in Germany when two dogs chased them toward a freight train. The driver of the train tried to stop, but he couldn’t in time, and so the sheep were killed. The dogs belonged to neighbors. They’d escaped before and caused mischief, chasing the sheep in January.

I don’t know if you’ve ever spent much time watching sheep, but they’re not the smartest animals. At least, they’re not individual or original thinkers. Sheep need a shepherd. They need direction. Otherwise, nothing good is in store for the flock.

Also, if you look closely at a sheep, you’ll notice that it doesn’t really have any natural defenses. There’s nothing scary about a sheep. There’s nothing to make you say, “I’d better not mess with that animal.” You don’t hear of sheep treeing people like a bear, or putting the fear of God in surfers like a shark. Other than their stink, there’s not much to make you feel the need to run away from them.

Part of the reason the story about the 67 sheep getting hit by a train in Germany caught my eye wasn’t just because I could easily translate all the words in the title, but because it wasn’t the first time I’d read an account of a lot of sheep dying at once in such an incident. Not long after I got here, I remembered reading a story about a bunch of sheep dying somewhere by running off a cliff. See, I remember these things because I figure they might be good for a sermon illustration someday. I googled it. Sure enough, in 2005 almost 1,500 sheep jumped off a cliff in Turkey. 450 died. The rest survived because as the pile at the bottom of the cliff got bigger and their fall was more padded. Why did they all run off the cliff? The shepherds said one ran off first and the others just followed.

I’ll admit, I must be a bit twisted, because I am pretty sure I chuckled a bit the first time I read that story, imagining the shepherds’ faces and what that huge pile of sheep, one jumping onto it after another must have looked like. I mean, can you imagine it? What dumb animals! Yet what does Jesus so often call us in Scripture? We are sheep. He is the Shepherd. Don’t you feel flattered?

Do you not think you are as helpless as Jesus’ depiction of you as sheep would paint you? Then answer this question honestly: How well have you stayed on the narrow path without Him? Every thought, word, or deed that contradicts His Word and brings you shame is a step in the wrong direction. Without His loving warnings, His merciful calls back to the way of life, His trustworthy direction down the road, where would you be today? I know where I would be. I’d be in a big pile at the foot of a cliff, or staring down a freight train, or on the dogs’ lunch menu. If we’re honest, we know how prone we are, on account of our sinful nature, that desires precisely what brings death, spiritual or physical, to go astray, to get lost, to draw nearer and nearer to the cliff.

In Ezekiel, God laments the horrible job Israel’s pastors had done of shepherding the sheep. Far from being His voice among His flock, the pastors had become servants to the wolves. Rather than warning the sheep, they shrugged their shoulders at sin or even urged them on in it. They told the people what they wanted to hear, not what they needed to hear. They spoke the language of the times, not of the Bible. And so the Lord rebuked them and said, “Behold, I, I myself will search for my sheep and will seek them out. As a shepherd seeks out his flock when he is among his sheep that have been scattered, so will I seek out my sheep, and I will rescue them from all places where they have been scattered on a day of clouds and thick darkness.”

And the Lord has kept His Word. We saw Him come to shepherd His sheep in these recent months, in Lent and Easter. We saw the Good Shepherd come to the lost sheep of Israel and indeed for those who were not yet part of that flock. We saw Him leave the ninety-nine who saw for no need for repentance, the self-righteous and Pharisaical, and seek the one, the repentant, the tax collector or sinner. We heard Him call out warnings to a lost and unbelieving generation. We heard Him point the way to those who would follow, leading them to the gate to the sheep pen, where they would be secure, to the cross, where as the world was covered with darkness the Light of the World gave His life. As the wolves attacked, as our sins and the devil’s hatred lashed out violently and with death in their eyes, He did not flee like a hireling and leave His sheep for dead. No, what does He say in our Holy Gospel? “I am the good shepherd. The good shepherd lays down his life for the sheep.”

The number of sheep that died in that train accident is appalling. The number of sheep that died at the foot of that cliff in Turkey is baffling. But let me make this clear: those numbers are nothing compared to the number of sheep at risk should the Shepherd’s voice be muted, should shepherds fail to echo the Shepherd’s frantic shout for lost sheep, not unlike a modern dog owner desperate to find his or her wayward best friend. We are sheep, and the smartest sheep is the one that realizes the limitations that come with being a sheep and therefore cling to their shepherd. Those are the sheep that survive, that live.

Peter writes, “For to this you have been called, because Christ also suffered for you, leaving you an example, so that you might follow in his steps….By his wounds you have been healed. For you were straying like sheep, but have now returned to the Shepherd and Overseer of your souls.”

A few years ago I had the privilege of presenting at a conference in Croatia. Long story short, a friend (a guest on the podcast, John Bortulin) came with me, because he had ancestors in a little village on a little island in Croatia. We took a few days to visit and met some of his cousins. We ate dinner with one cousin and her family—they were amazingly gracious hosts—and in our time there we had a lot of fun with her boys, to whom we gave funny American names (Bob and Billy Bob). We played soccer in the town square by the church. If you kicked the ball too hard, it was going down a cliff into the sea. Anyway, we found out his cousin and her husband each had their own sheep. We asked where they were. They explained they were in the forests around the village. We asked how they kept track of them. They said they just called them. Her sheep came to her, his to him. What an amazing gift! They knew each voice. That was their greatest gift: listening.