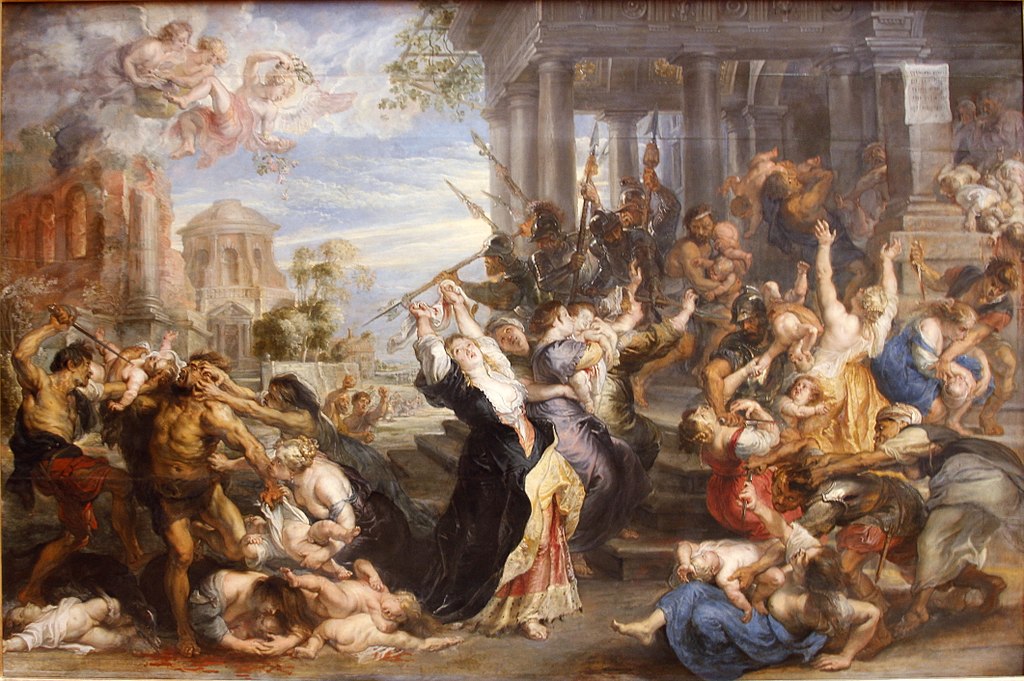 There are plenty of sad portions of Scripture to pick from, but this might be one of the saddest of them all. In a fit of jealous rage, King Herod ordered all baby boys in Bethlehem, two years and younger, slaughtered. Herod was deemed “King of the Jews” by Rome years earlier. Not Prefect, not Governor, but King. So when wise men from the east came looking for the King of the Jews, Herod was insulted. He was the King of the Jews. So he plotted. He gave directions to the oriental sages and instructed them to come back to Jerusalem and tell him the exact location of the newborn King of the Jews. The Magi were warned of Herod’s plot, so they slipped out of Palestine without reporting to Herod. This is when Herod ordered the murder of all the boys of Bethlehem. Just to make sure his title “King” would be secure he enacted infanticide. Thus the slaughter of the Holy Innocents, an event the church forces herself to remember in the middle of the twelve days of Christmas on December 28th.

In a twist of sorts, the blood of those innocents spared Jesus. The Holy Family fled to Egypt but these boys were left behind to take the brunt of Herod’s insanity. They died and Jesus lived. Herod was content (as much as a tyrant like he could be content) and so Jesus was safe… for a while. Innocent blood was shed. But not really. Those boys were sinners just like us. They needed a Savior, too. And their blood would only cause tears, not salvation. There needed to be a slaughter of a truly innocent one.

I know many of you mourn the loss of children, born or unborn. A miscarriage, an abortion, a genetic disease, a tragic accident. I know many of you mourn alone because sometimes these are not publicly known lives that have been lost. These are not politically motivated murders that the press reports on; these are often private matters between mother, father, and doctor. I also know that there might be guilt involved in this mourning, whether you are actually guilty or not. In the middle of tears, it doesn’t matter that much, does it? It’s all tragedy. It’s all not the way it is supposed to be.

You might, at times, refuse to be comforted. It’s too big of a sadness for trite words or flowers. The last thing you need is someone who has not gone through such a tragedy to tell you that “It will all be okay.” You might, by choice or not by choice, carry this sadness alone or with only a few chosen people. Yet you are not alone. Rachael wept with you. The Church weeps with you. The Spirit groans with you. Christ mourns with you. And he knows because he knows all. We do not have a High Priest who is unsympathetic with us. He too lived here. He too knew about Bethlehem’s boys. He too wept. He too was tempted.

“For I am convinced that neither death nor life, neither angels nor demons, neither the present nor the future, nor any powers, neither height nor depth, nor anything else in all creation, will be able to separate us from the love of God that is in Christ Jesus our Lord” (Romans 8:38-39).

That baby boy who escaped Bethlehem for Egypt came back. He came back and he did one better than his hometown boys. He died for them. The Innocent for the corrupt. So may we weep as Rachel did during her time on earth. These tragedies deserve our tears. May we ultimately rejoice with Rachel right now as she sings in heavenly bliss with the angels… and some Bethlehem boys as well.