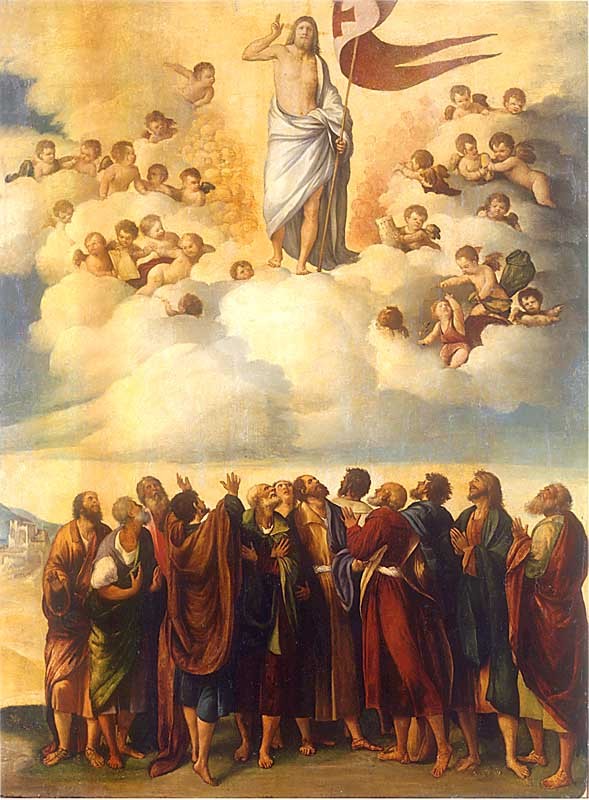 If you haven’t yet, check out our episode on the Ascension with Pastor Tyler Peil, which can be found here: LetTheBirdFly.com/9

Bible trivia time. The Bible only reports two men ever having gone to heaven without dying. We have one before us in this reading. Do you remember who the other was? Want a hint? We hear about him in Genesis 5: “When Enoch had lived 65 years, he fathered Methuselah. Enoch walked with God after he fathered Methuselah 300 years and had other sons and daughters. Thus all the days of Enoch were 365 years. Enoch walked with God, and he was not, for God took him.”

And that’s all we hear about Enoch. Pretty interesting isn’t it? Wouldn’t it be nice to know more? Wouldn’t it be nice to more about Enoch’s life, what he was like, where he lived, what he did, who he knew, what he had? But Moses doesn’t tell us. Apparently he didn’t think it important and apparently God didn’t think we really needed to know. And maybe there’s something to that. Enoch walked with God. That’s all that mattered in the end. Whatever he did or had, whoever he knew, wherever he lived, in the end, when it boiled down to it, what mattered was that he walked with God. And what does that mean? It means he believed. Enoch was a believer. And so Moses tells us Enoch was born, he raised a family, and he walked with God, and God took him without ever dying.

When you die, when whoever your pastor is buries you, no matter how many stories people have to tell, no matter how many things you had, no matter who you knew and where you lived, what will ultimately matter, what will be your ultimately legacy, what will bring true comfort to those gathered is that in Jesus, by God’s grace and through His gift of faith, you walked with God. You were born, you raised a family if you were so blessed, but no matter what and ultimately, you walked with God, just like Lazarus walked out of the grave after Jesus raised him, walking, not by His power, but by the power of God’s creative Word, for the righteous live and walk by faith.

What a spectacular event we see before us in our reading. Elijah, the second and only other man taken to heaven without death, so far as we know, is brought to glory by chariots of fire. Can you imagine? Stand in Elisha’s sandals, the prophetic understudy afraid to lose his master and mentor, and look into the skies as Elijah travels upward and away to heaven. What an impression it must have left! What a vindication of Elijah’s ministry! Many had doubted the prophet. Many had rejected God’s Word which Elijah preached. Many had mocked him and called him a fool and a liar. And yet here he was, with witnesses to attest, taken to heaven without every tasting death, carried off in stunning, stupendous, unparalleled chariots of fire.

But today we consider the Ascension, a great festival of the church too often neglected. So why are we hearing about Elijah? Perhaps you’ve already caught it. In case you haven’t, let’s take a moment to think about it.

On Ascension, Jesus was taken to heaven. He ascended with the clouds just as He will descend again to judge the living and the dead, the final work He will perform to mark the consummation of this world and all His promises. Jesus, who had been doubted, reviled, called a fool and liar, now risen, alive as He was ever before, ascended in glory to heaven, His apostles His witnesses to all the world—and they indeed did bring the good news of this glorious event to all of the known world of their day. And unlike Elijah, Jesus ascended, not to depart from His work as our Prophet, Priest, and King, but to continue. He hasn’t left us. He’s still active, present through Word and the Sacrament. No, He’s ascended, not to take a break, but to continue and even expand His work for us and our salvation, through the Spirit He sent on Pentecost, bringing to us and all the world that which He already procured and proclaimed for us through His death and resurrection. He’s in control, in full use of His powers of God, attentive to our every need and sigh, determined to bring His flock through this life to glory.

Luke writes of the Ascension in our Holy Gospel, “Then [Jesus] led them out as far as Bethany, and lifting up his hands he blessed them. While he blessed them, he parted from them and was carried up into heaven.” How did Jesus ascend? He ascended in blessing. He ascended, as the parish I used to serve saw on the statue on the altar, with His hands extended in benediction, marked with the wounds that bring us consolation, once stretched out on the cross to pay for our sins and open the gates of heaven, now still outstretched over us in intercession. He’s no less concerned for us than He was when He gave up His life for us. He’s as concerned as ever, so much so that He is seated at the right hand of the Father, not for Himself, but for us.

Did you notice the apostles’ response to Jesus ascension? What might we expect from them? Surely sorrow, yes? Their Master had left them again. Perhaps fear? They had hidden in a locked room last time He departed. But that’s not what we find. No sorrow. No fear. Instead we read, “And they worshiped him and returned to Jerusalem with great joy, and were continually in the temple blessing God.”

Jesus is ascended, into the same glory as Enoch and Elijah, but with a much different purpose. Yes, this world will have its thorns and sorrows, but He’s prepared a better place for you, and He’s ascended in blessing to bring you there. No, He hasn’t promised to send you chariots of fire, but He will call you, whether through death or when He makes His final return, should He do so before we die. Rejoice. Bless your ascended Jesus. Walk with God, wherever you are, whatever you do or have, in life, through death, and to glory, all through faith, in faith, and by faith, the gift of God through the gospel. His ascension is yours. Where He is, you too will one day be. Amen.