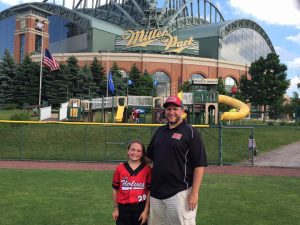 I know a lot of people don’t get club sports. I know a lot of pastors don’t like them. I’ll admit, we become a Thursday, Saturday, Monday church family once the season kicks into gear. I’ll also note, though, that we’ve made it work, even when I was the pastor and my wife was the pastor’s wife and my kids were PKs.

What’s the problem with club sports? There are many. First, anyone can play, if they can find a club willing to take their money. And a lot of times that anyone doesn’t really want to play, or maybe shouldn’t play, but their parents are determined to spend money. Second, anyone can play, if they have money to give a club, and some of the best players I know, and best families, struggle to find the money. Third, this is a commitment to a sport year-round, at a high level (if you are getting your money’s worth). There is no off-season, as some T-shirts boast. There are other problems, but these suffice for now.

So why club sports? Specifically, why club softball and baseball? Personally, my answer would be, outside of church, it’s the most church-like sport there is. Everyone has their own struggle. Each kid stands at the plate alone. Each kid fields the ball alone, and then throws it at a teammate, who has to catch it alone, dealing with the throw life (and his or her teammate) has dealt him or her. But there’s the dugout, too. I think the dugout is one of the best gifts life has given my kids…and me. The dugout is a special place. Special things happen there. Players are praised and forgiven. Players are admonished and restored. The dugout is where you go, no matter what, after each inning, after each at-bat. It’s where you belong, good day or bad day. It’s where your team is, in your uniform, whether you think you’ve worn it well or done it wrong.

A good ballplayer messes up less than a bad ballplayer, but every ballplayer messes up, a lot. No one bats 1000. .300 is great. .200 still helps a team. Some of my best defenders make the most spectacular errors. They might make twenty plays in a row, but when they mess up, it’s outstanding, and often has big repercussions. But they’re not that play. They’re part of the team. They don’t get a loss. The team does, and the team would have won if it had made a lot of other plays instead, or at least usually.

Finally, coaching has brought me countless blessings over twenty years of various sports. Outside of pastoring people, coaching has brought me more joy than anything else. I’ve become closer to people, players and parents, than I could have imagined. I’ve shaped and been shaped. I’ve consoled people at their lowest. I’ve rejoiced with people at their highest. I’ve given a sign that sent a kid into an out and sent them for the winning run. Their faces after each has taught me much. Even more, they’ve brought me to tears more than I’d like to admit. Whether it was a sermon on the mount or Buddha on the plains (my players will know what I mean), I’ve felt compelled to talk to them after games, cause something happened, and we all were part of it, and it was messy, good and bad, but we got through it together, and there was stuff we never wanted to do again, but also stuff that we didn’t deserve and stuff that brought us closer together, as well as moments where we all bailed each other out (and, boy, do my girls bail me out sometimes!).

Should families be in church? Of course. And I’ve known many families that have made impressive efforts not to miss no matter the cost. In cities like ours, the variety of services days and times prove a great aid. Should the church also work to accommodate people with crazy schedules, some with activities the pastor doesn’t understand the need for or the benefit? Well, that’s up to the church and the pastor, but I always found benefit in doing so, and I find benefit in a pastor and a church and churches that do so. Do kids have to play club sports? Absolutely not. Are club sports at odds with law and gospel? I can think of few things outside of church that can reinforce and build upon both, with the right parents or coaches or teammates. In short, my kids play club ball for a reason. And that reason, among others, is that on the diamond there are often all kinds of opportunities to appreciate the cross and their neighbor, especially the neighbors God has put next to them in the lineup or in the dirt. It’s not for everyone. It’s not a means of grace. But it need not be at odds with the means of grace, either, and it certainly can have its benefits, even for the Christian. Amen and play ball?