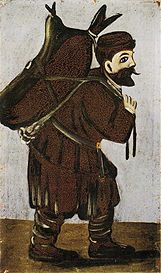 It wasn’t easy for some to jump on board with the gospel. At least not fully. It seemed to run against their entire religious upbringing. It seemed too fast and loose. Wouldn’t people use the gospel as an excuse to sin? How would the common people behave if they didn’t have to do good works? Wasn’t a big part of the job of religion keeping good order and producing obedient subjects?

It still isn’t easy for many to jump on board with the gospel. Paul heard the same concerns Jesus did. Luther heard the same concerns Paul did. We hear similar concerns today, even among people called to preach the gospel. We can get nervous with the good news of Jesus Christ, with free forgiveness, with unconditional absolutions, with salvation entirely as gift, with the law preached primarily to kill and the gospel preached as if every last hearer already has two feet planted firmly in heaven.

Jesus had just called a tax collector to be a disciple. This surely didn’t sit well with many. He had healed a paralytic, but only after forgiving his sins, something that some in the crowd grumbled only God could do (the whole point). He had called the first disciples earlier in the chapter, fishermen, and with a miracle that illustrated their new calling. He told them to cast down their nets for a catch (this was indiscriminate fishing). He had healed an unclean leper (it says something that the unclean dared to approach him and that He let them).

Now, in the midst of all this, a religious question, an objection, was raised. Was Jesus holy enough? John’s disciples fasted. So did the Pharisees’ disciples. Jesus’ disciples, however? Well, they ate and drank. What was up with that? Where was their religion? Didn’t they care about the laws and customs of their people? They were getting out-religioned!

Jesus’ answer was clear. The Savior has come. The Bridegroom is here. It’s no time for dour faces and asceticism. When the Bridegroom arrives, you feast. The days for fasting and dour faces would come, with Jesus’ death, soon chased away again with His resurrection. But not now. The kingdom of God was at hand.

Even more, Jesus’ wasn’t coming to inaugurate a kingdom of law, Human Religion 2.0. Jesus’ kingdom was a kingdom of grace. His disciples would have to break with the legal scheme of their neighbors and the other religions of the world. Jesus came to preach good news. Jesus is the good news. They were to be gospel people. Jesus told them, “No one puts new wine into old wineskins. If he does, the new wine will burst the skins and it will be spilled, and the skins will be destroyed. But new wine must be put into fresh wineskins.” Jesus had come to make all things new. He came to make us new. This wasn’t the same old religion.

There is a problem, though. We like the same old. The old Adam, the sinful nature, is a religious fellow and he loves religion so long as it’s not the gospel, Jesus’ religion. Jesus added, poking the bear, chiding the Pharisees, “And no one after drinking old wine desires new, for he says, ‘The old is good.’” We can’t by our own thinking or choosing jump on board with the gospel. Christ must kill us and make us alive. The gospel must do the work. That’s why Christ’s kingdom is a kingdom of gifts, not of wages.

Enjoy the new wine. Live by Christ’s unconditional absolution. Receive salvation as a free gift, bought with Christ’s precious blood, bestowed upon you free of cost and not as a reward. Will people sin? People will sin either way, but no one will offer true obedience, the obedience of faith, without this gift. No one will do truly righteous deeds unless they are first declared righteous for Christ’s sake—washed, pardoned, enlivened. Sometimes the old wine sounds good, but it will burst the wineskins. In the end it leaves us in self-righteousness or despair, without hope and without God as He came for us to have Him, in Christ, for free, and with free salvation for all.