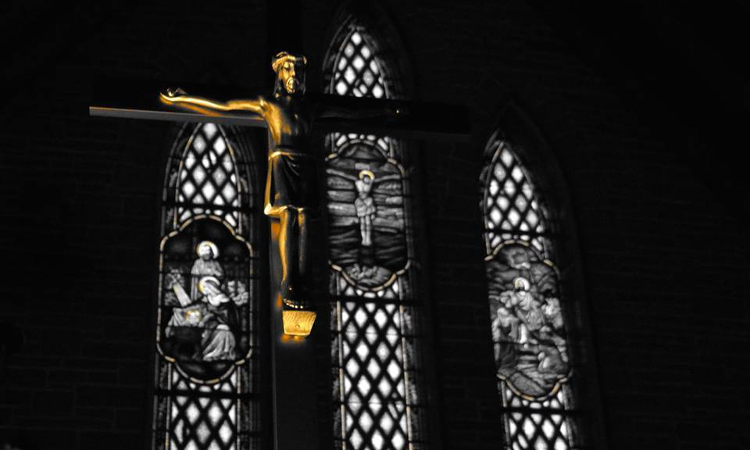 You’ve probably had it used on you before. Maybe you’ve used it yourself. Someone’s fallen into sin, you try to warn him or her, and, bam, the person plays the “Get out of Jail Free Card:” “Judge not lest ye be judged.” You’ve been bibled, and not only bibled, but King James bibled, perhaps by someone who doesn’t even know a Bible verse, perhaps by someone who wouldn’t know King James from Queen Elizabeth. But is that what Jesus really means here? Is Jesus the only one able to warn those on the dangerous road to hell? Are we restricted from warning one in sin if we ourselves have sinned? Well, you have to outbible a bibler, so lets dig in.

When a gathering was called to condemn the sins of a fallen brother, one of the desert fathers cut a hole in a bag of sand, put it on his back, and walked to the meeting. The others asked why he was doing this. He told them that in the bag, which was heavy and full, were his own sins. He’d placed this own hefty sack of sin behind him so that he could judge the sins of his brother, which were like a few little grains of sand compared to his own transgressions.

Think American Idol. I have to confess there was only one part of the show I liked, and that was the horrible singers, the William Hungs. The Germans would call such entertainment Schadenfreude, joy at another’s shame. We feel at home at the judge’s panel when another grabs the mic, but how many of us would be willing to get up and sing ourselves? I’m sure I could—I mean, have you heard me chant?—but let’s just say most are not going to Hollywood. It’s easy to give out grades when another’s sand is on the table, but which of us wants to set our sandbag before the jury?

The crux of our text comes at the beginning, in verse 36, “Be merciful, just as your heavenly Father.” Good luck! Let’s review. You are you, and not you in your Sunday clothes, you in your skeleton closet. Regrets shine like jewelry. Nothing is hidden. Everything whispered in the ear is proclaimed from the rooftops. Everything done with the lights off is replayed with the lights on. Think of the most ashamed you’ve ever been. Supersize it. That’s you before the heavenly Father. It doesn’t take a rocket scientist, let alone an almighty God, to see what you deserve—no plea-bargaining, no appeal. Yet what has your heavenly Father spoken? “I forgive you all your sins.” And Jesus says, “Be merciful, just as your heavenly Father.”

Let me translate. You think your neighbor’s fat; you’re fatter. You think you neighbor’s dumb; you’re dumber. You think you neighbor’s ugly; you’re uglier. There’s no need to hit the scales, take an IQ test, or step in front of the mirror. It is a matter of attitude. What does St. Paul say, and I repeat, ST. Paul? “This is a faithful saying, and worthy of all acceptation, that Christ Jesus came into the world to save sinners; of whom I am chief” (1 Timothy 1:15)? Well, if he’s the Chief, I’m the Captain, and let’s just call you General. Quite the team we have going, eh?

Judging here is connected with condemning. Both are put in contrast with forgiving. St. Paul warns the Corinthians, “So, if you think you are standing firm, be careful that you don’t fall!” What your fallen brother or sister needs is a life preserver, not someone to drown with them. A speck in the eye may not seem like much, but if you’ve ever had a splinter, you know that specks can make a grown man whine. How much more dangerous isn’t a plank? Fortunately, our Lord has taken your planks and carried them to the top of Calvary. And Calvary is where Christians learn to see. Calvary is the lens through which Christians view each other and the lost.

Mercy is always a wonderful prescription for Christian eyes. When we taste forgiveness, we can’t help but throw a potluck, and there is enough to go around. Sharing won’t leave any less. When we must warn one another that we’ve become short-sighted, that we’re in danger of trading Paradise for a penny, it is not because our vision is 20/20, but because we’re wearing the lenses of the cross, where our Lord died to save our brothers and sisters from the very path they seem to be walking. “Be merciful, just as your heavenly Father.”

James tells us, “Whoever turns a sinner from the error of his way will save him from death and cover over a multitude of sins.” Repentant sinners don’t need a “Get out of Jail Free Card.” They need Jesus. And you know that because you need Him as well. No one expects to find a doctor whose never been sick, or a mechanic whose car has never broke down, and no one will find a pastor whose never sinned, or a fellow Christian whose never fallen. We don’t diagnose sickness because we’ve never been sick. We diagnose the sickness to offer the cure. We don’t point out sin because we’ve never sinned. We point out sin to offer the same forgiveness we’ve received. Why? Because that’s what God has done for us. “Be merciful, just as your heavenly Father.”

Imagine if Jeffrey Dahmer had kids. Would his kids have rightly insisted that because he had eaten people they should be able to eat people before being convinced it was wrong? Of course not; sin is sin before you take a bite. Would Newton’s law be overruled if he’d stolen the apple that fell from the tree? No, gravity is gravity all the same. Remember what Mom used to ask, “Would you jump off a bridge if your friends did?”

Next time someone tosses “Judge not lest ye be judged” back in your face when you are lovingly trying to win them for Christ, carry out the very words of Christ they’ve just thrown in your face and simply ask them the Mom’s question, slightly altered, “Should you jump of a bridge just because I have?” Assure them jumping off bridges hurts, and point them to the cross, the bridge to heaven. Point them to Christ, who has crossed that bridge to take hold of us and drag us there with Him, even kicking and screaming if need be, through His gift of faith which puts our old, recalcitrant will to death and gives us instead what we are so slow to show ourselves: mercy.