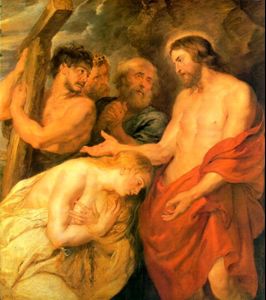 The children came into his house all out of breath. It’s not that the distance we so great, only a mile or two, but, as usual, they ran the last half mile or so. They raced to Grandpa’s house because they wanted Grandpa to tell them their favorite story. Like only a little child can do, the youngest grandchild crawled up on Grandpa’s lap and looked up at him with those big, puppy dog eyes and asked: “Grandpa, can you tells us again about the day you met Jesus?” He had told the story a hundred times, if he had told it once. But the children never tired of hearing it…nor he of telling it. “What is it?” he thought to himself, “at least 40 years ago now, but I can still remember it as if it were yesterday.” “Well, kids,” he said, “you see, I had come up to Jerusalem for the Passover all the way from Cyrene in Africa. And it was just as I arrived…yes, just as I started coming into the city, when it happened. It was there I met Jesus.”

Spellbound, the children hang on his every word,because it’s not just the story of Grandpa Simon, because it’s the “Greatest Story Ever Told,” the story of Jesus. But if Simon could be here with us tonight, he’d be the first to tell us that it wasn’t such a pleasant meeting at the beginning. Simon didn’t realize what an incredible opportunity he was being given. Quite the opposite, actually! And if he could have avoided it, if he could have pushed his way through the crowd and avoided the whole scene, he would have. But if he had, then he would have no story to tell his grandchildren now, no victory over death and the grave, no beaming faces to welcome to his side one day  in eternity, no hugs of joy and love to look forward to in the grand reunion in heaven, in short, no Savior, no salvation, no life. But all this was now his because one day by God’s grace alone, Jesus of Nazareth was passing by.

As they led him away, they seized Simon of Cyrene, who was coming from the country. They placed the cross on him and made him carry it behind Jesus. A large crowd of people was following him, including women who were mourning and wailing for him. Jesus turned to them and said, “Daughters of Jerusalem, stop weeping for me, but weep for yourselves and for your children. Be sure of this: The days are coming when they will say, ‘Blessed are the childless  women, the wombs that never gave birth, and the breasts that never nursed.’ Then they will begin to say to the mountains, ‘Fall on us!’ and to the hills, ‘Cover us.’ For if they do these things to the green wood, what will happen to the dry?” When we read this story, we can’t help but feel for Simon. Here he is, minding his own business, doing what he was supposed to be doing according to the Old Testament laws and regulations, when suddenly soldiers grab him and press him into this hard and embarrassing work. He had to wonder what people would think. Would they realize that he was just filling in for the real criminal, or would they think that he must have done something worthy of death? Were there shouts and jeers directed against him on that fateful day? Did he himself feel the lash upon his back as we struggled under the weight of this borrowed cross?

But even worse than all of that, imagine the disappointment Simon must have felt as he carried this cross. He had just trekked some 800 miles to come for the Passover. But now, just by touching the cross already stained from Jesus’ bloody back, he may very well have become ceremonially unclean…unable to participate in the Passover celebration. How deflating that must have been! How many unanswered questions must have been running through Simon’s mind? Remember, he was just coming in from the country. He didn’t know what this parade of criminals was all about. He didn’t know who this Jesus of Nazareth was and why he was being led away to this uncommonly popular execution. He didn’t know about the trial or the prisoner exchange that set a murder free and led the innocent Lamb of God to slaughter. It’s not hard at all to imagine how upset Simon must have been on that day. Did he protest to the soldiers? Did he try to explain how this would ruin his whole trip? Did he grudgingly take up that cross, muttering under his breath about the injustice of it all? Did he complain about his lousy luck as he struggled with that shameful burden? He must have wondered: “Why me? What have I ever done to deserve this?”

And yet, though I’m sure he didn’t realize it at the time, this was the best thing that could have ever happened to Simon during his trip to Jerusalem. Though he had no clue, Simon was being given a marvelous opportunity of God’s grace that it seems he took full advantage of. Jesus of Nazareth was passing by. He was passing by on the way to his execution. And without this “chance” meeting, or so it seemed at the time, Simon would never have met his Savior, never heard him speak, never watched him die. Was it just chance that brought the two of them together. Was it just blind fate or some lucky coincidence that they met this way? We, who know the majesty and power of God, know better. Our lives are not guided by the stars, but by the God who created the stars and put them in their places. Our God is not a God far off who lets us muddle our way through life without so much as a curious glance. No, he’s the God who knows us personally, who counts all the hairs on our heads, who knows what we need before we ask, who is ready to move the mountains into the midst of the sea in order to save and deliver his people. This was no chance meeting, but one fully orchestrated by Simon’s saving God and loving Father. As strange as it may seem, this is a divine appointment, made long ago in the secret councils of eternity; a window of opportunity for Simon of Cyrene to meet his Savior. To Simon, Jesus was just an unknown prisoner, just another fellow from the wrong side of the tracks getting what he deserved…until God stepped in and opened Simon’s eyes.

And so, bearing the cross, Simon follows Jesus on that mournful mountain climb. He stops when Jesus stops  and hears him speak some words to the wailing daughters of Jerusalem, words that must have seemed rather strange at the time…coming from the lips of a condemned man. Jesus turned to them and said, “Daughters of Jerusalem, stop weeping for me, but weep for yourselves and for your children. Be sure of this: The days are coming when they will say, ‘Blessed are the childless  women, the wombs that never gave birth, and the breasts that never nursed.’ Then they will begin to say to the mountains, ‘Fall on us!’ and to the hills, ‘Cover us.’ For if they do these things to the green wood, what will happen to the dry?” From the lips of the crowd came nothing but jeers and curses. And how did this man respond? He spoke words of compassion and warning, he spoke words of Scripture. Did Simon recognize the words of Hosea the prophet? Did he wonder at this man who seemed so unconcerned with his own personal tragedy and instead thought of others? Did Simon linger at the cross after his grisly duty was over? Did he watch as the burden was lifted from his shoulders and transferred back to Jesus? Was he there to hear Jesus pray for the forgiveness of his tormentors? Did he see the connection between Jesus death and this eerie darkness that descended and covered them like a blanket? Was he there to feel the earth quaking beneath his feet as Jesus breathed his last? Did he see the tombs of the righteous split open? Did he meet those who had been raised to life at Jesus’ death? Did he hear the centurion exclaim: “Surely, he was the Son of God!”?

The Bible doesn’t give us those answers. But from what it does tell us, it’s likely that Simon, the wrong man in the wrong place at the wrong time, saw it all. And what at first appeared to be only and odious burden, suddenly became the opportunity of a lifetime. “Why me?” we imagine he asked. And the Lord responded by “opening the floodgates of heaven and pouring out so many blessings that he doesn’t have room enough for it.” Certainly, there’s a lesson in this for us, too. So often, like Simon, we can see no further than our own present difficulties. We concentrate on all of the bad things that happen to us…the things that go wrong, the things that don’t turn out the way we planned or expected. “Why me, Lord?” we ask. “What good could ever come of this?” But just as often, the Father who clothes the lilies of the field and feeds the birds of the air…who knows our needs far better than we…has thoughts higher than our thoughts and purposes higher than our own. And if we will simply put our hands over our own mouth and quit our complaining, one day he will show us how all this truly, “works together for our good.”

What appeared to be only a “chance” happening to Simon was certainly far more under the watchful eye of his heavenly Father. For it would appear that GOd used this occasion to bring Simon and his whole family to faith. Mark’s Gospel tells us that this Simon, who was forced to carry Jesus’ cross, was the father of Rufus and Alexander. And in Romans 16, Paul sends greetings to a young man named Rufus and to his mother, who Paul says, “has been a mother to me too.” It’s not too difficult to understand the Lord’s answer now is it…when Simon may have asked, “Why me?”

So it is for us, too. Often the Lord gives us opportunities, sometimes even under the guise of problems and troubles. And he asks us simply to trust and believe that he knows what he’s doing.Trust in him and let him accomplish his will. For he promises that these things will turn out far better than we can even think or imagine. Behind every dark and stormy cloud hides our Father’s smiling face.

You can picture Simon, can’t you? You can picture him with Rufus and Alexander’s children sitting at his feet, hanging on his every word. You can see his tear stained face as he finishes his story. “Wow, Grandpa, that was quite a privilege, wasn’t it…to carry Jesus’ cross?” “You know children, for years I used to think the same. But now I realize that it was really the other way around. Jesus carried my cross. I carried only a cross of wood. He carried my cross of sin and shame.” My fellow Lenten pilgrims, he’s carried yours too! May we ever ask with unending grace and gratitude, “Why me?”