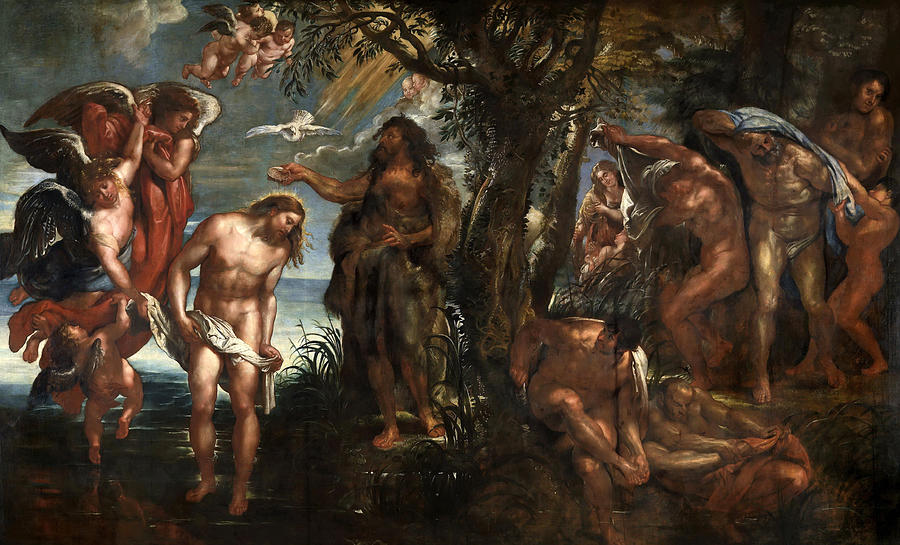 This is the second part of a two-part series.

When Jesus was baptized he was inaugurated, in a way, into the office of Christ. Think of the Presidency of the United States. It is an office. Not the Oval Office, of course, but a position that is filled by a person. And this person is inaugurated into this office with a certain level of pomp and circumstance. Jesus of Nazareth is inaugurated into the office of the Christ with some pomp and circumstance. And, as is his way, it is lowly pomp. He is put under the water by a mere man, and a scraggly one at that, John. But there are also dignitaries there as well as the masses, the Father and the Spirit. Heaven opened up and the Spirit descended in bodily form like a dove. Jesus truly was the Messiah, the anointed one, anointed by the Holy Spirit. The Father was also there. He bellowed from heaven, “You are my Son, whom I love; with you I am well pleased.” In case anybody was still wondering, Jesus is the Chosen One, the Son, the perfect Son in whom the Father is pleased. He receives the ultimate endorsement, the Father and the Spirit.

This inauguration is really a commissioning, an ordination, and a coronation because this office of Christ is threefold: Prophet, Priest, and King. It is, of course, true that Christ is always these things, he is King of all forever, but here in the waters of Jordan it is announced to the world. In each of the three parts Jesus of Nazareth is the only person who could ever occupy the office and fulfills the office in a unique way. He is commissioned as Prophet, ordained as Priest, and crowned as King.

A prophet speaks the Word of God. He is preacher and we need a preacher. Many Old Testament prophets could predict the future, but at their hearts they were preachers, and we need preachers. Humanity was created with word, we are sustained by word, we communicate with God and each other with word, and God wants us to take him at his word. Words, words, words. And so preachers preach words. But not just words about something, but words that heal. “For you” kind of words. I forgive you. Jesus died for you. This is all for you.

Jesus too preached. He too used words. He even predicted the future. He is, no doubt, a prophet of God. He preached in his hometown, Nazareth. But Jesus is no ordinary preacher. In Nazareth he preached “Today!” After reading the prophecy of Isaiah predicting the Messiah’s actions here on earth, Jesus preaches “Today!” “Today this scripture is fulfilled in your hearing.” You see, he isn’t just the preacher, he is the content of the preaching. He speaks the Word of God and he is the Word of God. There is no other preacher like him. And yet our preachers today follow in his footsteps even as they stumble. For the message is the same and the forgiveness is the same. It is as if Jesus said the words himself, “I forgive you your sins… this is for you! Today!” Jesus’ baptism is, in a way, his commissioning as Prophet and it is for you.

A priest mediated between man and God. There is a gap that needs to be covered, a gap between righteous God and unrighteous man. In the Old Testament a priest mediated this difference with a sacrifice. The average person could not approach God. There were barriers in between. In the temple  there were a series of courtyards, a closed off building only priests could enter, and then a curtain that separated two rooms in that building, the Holy Place and the Most Holy Place, into which only the High Priest could venture but once a year. And the way to cross these barriers? Blood. So sacrifices were made on behalf of the people by the mediating priest.

Yet these were only symbols of the real deal. Those countless lambs were a mere shadow of the Lamb of God to whom John pointed. So again we see Jesus as the ultimate fulfiller of the office. He is both priest and sacrifice. Those others priests offered endless sacrifices for sin but they never stopped and the sacrifices of animals were only a picture of what was to come. But when the High Priest offers himself, that’s it. Sins are paid for. The job is completed. And the temple curtain tore in two. So we who were distant from God are reconciled to God. The average Israelite could get close to the mediator, the priest, but not to God. Since Jesus, our High Priest, is God, we are close to God, for we are close to the Priest who is God. The barriers have been broken down. We even dine with him as he is both host and meal at the Supper. There is no gap anymore. Jesus’ baptism, in a way, was his ordination as Priest and it was for you.

A king rules. Israel wanted a king, begged for a king, cried for a king. They were desperate in the age of the Judges before Saul, the first King of Israel, was anointed. They saw other nations with kings and equated those nations’ strength with a monarch, a centralized power, while they ran around as a disorganized bunch of rag-tag tribes. And they were right. But they already had a King, God. They didn’t listen to their Monarch and tragedy followed them year after year. God said no to their request at first. He knew what an earthly king would be like. But finally he relented. The Kings of Israel did not disappoint God’s low expectations.

The Jews of Jesus’ day wanted a king too, for similar reasons. They would get their King but he would disappoint their expectations. Yet Jesus is the ultimate king both in power and in mercy. What other king boasts as much power as Christ the King through him all things were made, who rules at the right hand of Father. But what other king intimately serves his people on such a personal level? This King came not to be served but to serve and give his life as a ransom for many. We have a king who is both the most powerful being around and one who serves us. Christ the King is the ultimate king. Jesus’ baptism, in a way, was his coronation and it was for you.

So Jesus of Nazareth, the one baptized by John, is inaugurated into this threefold office of the Messiah, the Christ, and it is all for us. And then, to top it all off, as we talked about in yesterday’s devotion, we are baptized into Christ.

Now having gone through this baptism with our King, who serves us, even being baptized himself…

Now having gone through this baptism with our Priest, who sacrifices himself on the cross for us…

Now having gone through this baptism with our Prophet, who preaches to us and is the content of that preaching…

What could possibly separate us from his love?