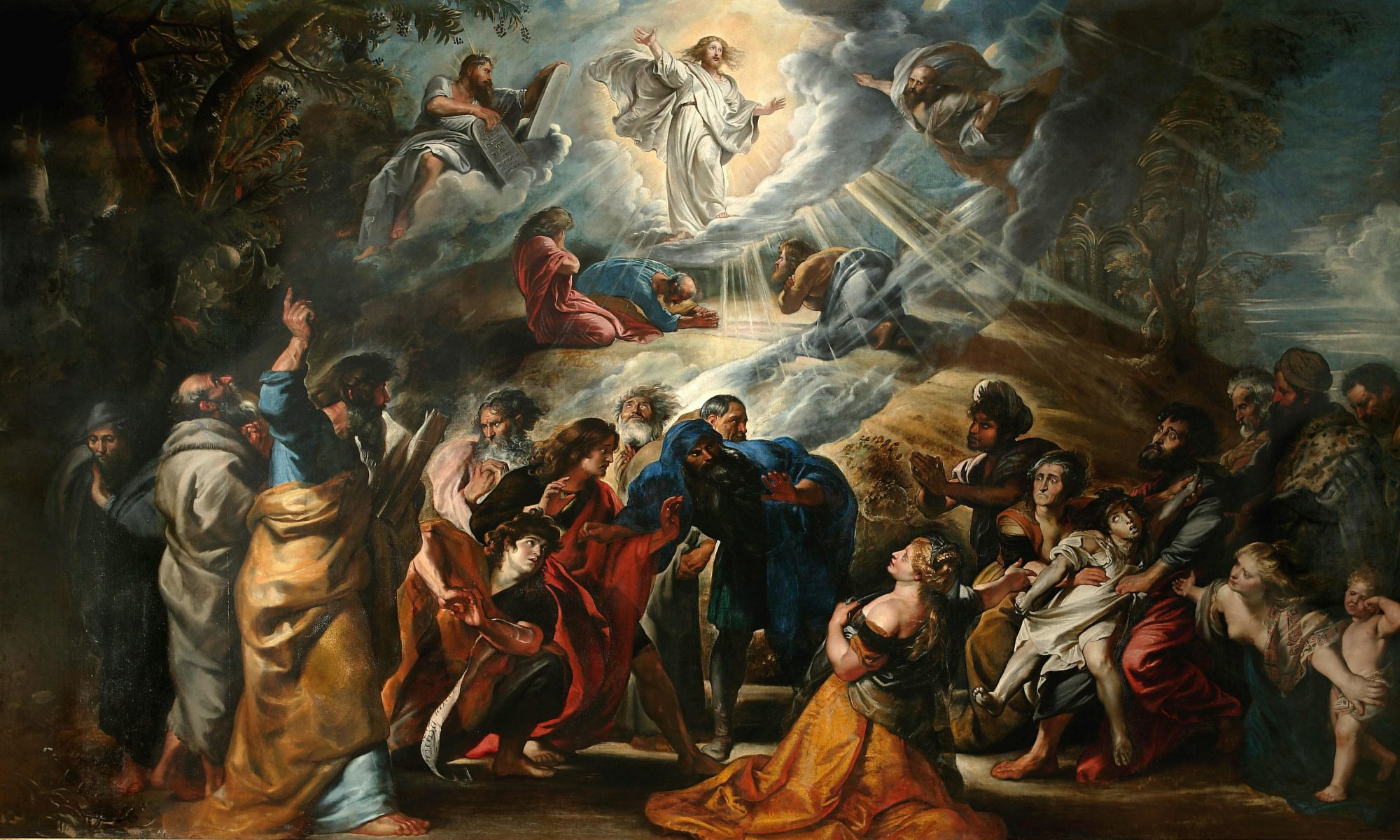 This week we need to remember again how to read the Bible. We need to stop and ask where we’re at. As you can see, we’re in Luke’s Gospel today. Now we’re in the ninth chapter, which you might think places us somewhat early in Jesus’ ministry. That, however, is not the case. We are relatively late in His ministry. He is preparing to go to Jerusalem for His passion, His suffering and death. When Jesus spoke with Moses and Elijah, He spoke to them about His impending cross, “His departure which He was about to accomplish at Jerusalem.”  Luke, then, like John, for instance, spends an inordinate part of his Gospel on Jesus’ last days, weeks, and months.

Our lesson tells us that this took place “about eight days after these sayings.” We might be tempted to skip over that, but we shouldn’t. So what were these sayings. Here’s where we need to look in front of our lesson in Luke’s Gospel. This is what we read:

And he said to all, “If anyone would come after me, let him deny himself and take up his cross daily and follow me.  For whoever would save his life will lose it, but whoever loses his life for my sake will save it. For what does it profit a man if he gains the whole world and loses or forfeits himself? For whoever is ashamed of me and of my words, of him will the Son of Man be ashamed when he comes in his glory and the glory of the Father and of the holy angels. But I tell you truly, there are some standing here who will not taste death until they see the kingdom of God.”

Luke tells toward the end of chapter 9, when Jesus was rejected by a Samaritan village, “When the days drew near for him to be taken up, he set his face to go to Jerusalem.” The transfiguration with all its glory, then, is sandwiched by the cross and talk of it. This is important. As we move from Epiphany and our focus on Jesus’ divine power and prepare to enter Lent and our focus upon Jesus humanity, which He took up in order to be our Substitute, we get one last glimpse of Jesus’ glory and one last important reminder.

Jesus took the same apostles with Him at His transfiguration, some of the first He’d called, that He would take with Him in Gethsemane—the same three that had been with Him when He’d raised Jairus’ daughter as well. Interestingly, we see them doing the same thing here that they would do at Gethsemane: sleeping. None of us would ever fall asleep on Jesus, right? None of us are sleeping right now, right? Apparently Jesus had prayed a long time and so they were tired. They were tired and so they slept.

Peter’s later warning to us in his first epistle comes to mind, “Be sober-minded; be watchful. Your adversary the devil prowls around like a roaring lion, seeking someone to devour” (1 Peter 5:8). Have you been sober-minded and alert? We are about to enter the Lenten season, where we place an even more special emphasis on examining ourselves? Peter eventually learned his lesson and warns us not to repeat it. Wake up. Be in the Word. Be aware of the dangers around you. Flee the wicked and pursue the good.

Here’s where I have to laugh, though, when I picture the scene. Peter, James, and John were sleeping. Put yourself in their shoes. Imagine if you saw what they saw when you woke up one day. Did they think they were in heaven? There before them was Jesus in His glory and Moses and Elijah with Him. Peter begins to speak, but Luke makes clear for us that even then he wasn’t fully sure what he was saying. He was fully awake, but doesn’t seem to have had all his senses. He suggested building some tents to commemorate this event, but instead God would see to it that they didn’t even speak of this event until after the main event we are to commemorate and still do commemorate in the Lord’s Supper had taken place: His death on the cross.

Then the Father spoke. Do you remember where else this happened? At Jesus Baptism He’d spoken as well, very similar words indeed to what He spoke here. He spoke more words than Luke records for us. That’s why Mark, for instance, records the Father’s words a little differently. Different words struck a cord with them. Luke tells us the Father said, “This is My Son, My Chosen One; listen to Him!” Mark, as we see in our verse of the day, which is from the NIV, tells us the Father said, “This is My beloved Son; listen to Him” Both get the “listen to Him.”  Luke emphasizes that Jesus is the Chosen One, while Mark emphasizes that He was beloved.

Why would the Father remind the apostles of this here? That’s where context is king. Before and after the Transfiguration came the cross, as we already heard. The apostles would be tempted to wonder if God in fact had chosen Jesus and loved Him. They’d be tempted to ask if they’d been had. In fact, even Jesus on the cross would cry, “My God, My God, why have you forsaken Me?” (Matthew 27:46). And can we blame them? And can we blame Him? It’s easy to see the cross, which the Book of Hebrews tells us is a sign of God’s love (Hebrews 12:6), as a sign of His anger or indifference, when it is no such thing—notice that, when it is no such thing.

God loves you. He loves you in Christ, whom He loved in and through His cross. He loves you in and through His cross and your cross as well. Remember that. He is never so near as when He seems far. He is never more loving than when He seems uncaring. That is what the transfiguration reminds us. What a wonderful day it is, but not the day. It was a glimpse of Jesus glory, a preface to the cross and the empty tomb. Remember that He is who the apostles saw today, true God, especially as it becomes painfully obvious that He is also true man in the solemn season of Lent. Remember the same should you suffer.

Jesus, your Savior, who suffered and was tested in every way, just as you are, only without sin, is also your God. You pray to One who has walked in your shoes, who has indeed walked the very path from death to life down which He leads you. You pray to One who Himself prayed, and He is strong to save. He bore the cross of all of our sins and He will not forsake you under your cross. No, He will bear up with you. So hear again His sayings that preceded the transfiguration: “If anyone would come after me, let him deny himself and take up his cross daily and follow me.”