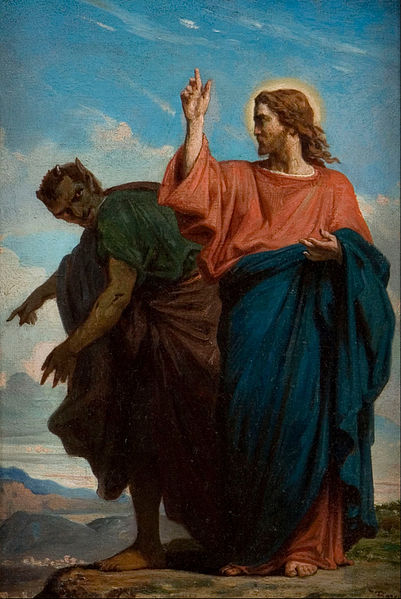 “One little word can fell him.” We just sang those words in stanza 2. I’ve sung that line hundreds of times, and many of you have too. But until this week, I never bothered to wonder what the little “word” was. What word did Martin Luther think could defeat the Devil? I think maybe I assumed it was something like “Jesus” or “baptized” or “faith.” Maybe I assumed that Luther didn’t have one word in mind but rather was making the point that God’s Word in general, even in the smallest of quantities, is enough to fell Satan. But there actually was a word that Luther had in mind and it all revolves around the battle in our lesson today.

Today, we find Jesus going toe to toe with Satan. But before we can really dig into what is happening here, we really need to go back to the beginning, where the battle first began. It was so drastically different than what we see here. Back in the beginning, in Eden, there was not yet any human sin corrupting the world. In the Garden, Adam and Eve were surrounded on every side by countless reminders of God’s perfect kindness. The world was their oyster as they like to say.

But then, when Satan called God’s love for them into question, when he suggested that God was holding out on them and they should take matters into their own hands, when he told them that God was bluffing and that they wouldn’t really die, they believed the lie. And all of this even while they were in the Garden itself, surrounded by everything they could possibly need or want to be happy.

The incredible nature of believing such obvious lies makes it seem almost like a fairy tale. That is, until we recognize that the same lies—despite all the evidence we too have to the contrary—still deceive us every day! Satan’s lies work because at the root of our natural hearts, we sometimes doubt our God as well.

How much harder isn’t it to trust God sometimes when it feels like we’re in the wilderness and not in the Garden? When the evidence of God’s goodness is not within our grasp, but is out of reach? When you’ve had to learn the hard way that the things you thought would make you happy haven’t? When your dreams have gone up in smoke? When the opportunities have vanished? When the people you trusted have let you down? Where is God in the wilderness when your heart is broken and your soul is empty, aching to be fulfilled? Does God still exist? Is God still good? Does he even care? Does God love me?

As Satan carries out his work, lies flow out of his mouth like water. Jesus himself said, “[Satan] was a murderer from the beginning, not holding to the truth, for there is no truth in him. When he lies, he speaks his native language…” His liquid lies seep into every nook and cranny of our world. They seep into our homes, our heads, and our hearts. They come in many different shapes and sizes. But one common thread ties them all into one horrid plot. More than anything else, Satan wants us to believe one grand lie, the same lie he used to get Adam and Eve to bite: God doesn’t love you.

It’s into that battlefield that we find Jesus stepping today. But how different from Adam and Eve. “Jesus, full of the Holy Spirit, returned from the Jordan and was led by the Spirit in the wilderness, where he was tempted by the Devil for forty days. He did not eat anything during those days. When they came to an end, he was hungry.” Jesus’ temptation does not take place in a garden surrounded by every possible reminder of God’s goodness. No, the Spirit leads him into the barren wilderness where for 40 days he (who is true God but is also true man) goes hungry. He was hungry, he was alone, except for Satan tempting him with his every breath, in this god-forsaken place. It had been more than a month since he’d heard his Father’s voice in the Jordan, talking about love for him. But how empty might those words have seemed about now. Where was God now while Jesus was suffering?

And it’s now that Satan throws his first punch. “Does the Father love you? Are you really his Son? Where is his care for you as he leads you out here to starve in this wilderness? What you need to do is take matters into your own hands and turn these stones into bread.” Jesus answered him, “It is written: ‘Man shall not live by bread alone, but by every word of God.’” Resting in his Father’s Word, Jesus punches back: “Liar.”

Satan counterpunches. “So you live by your Father’s Word, do you? Will you also die by his Word? Doesn’t this Father who says he loves you and whose Word you say you live point you to suffering and a cross and to unimaginable agony for a world that doesn’t love you where most won’t even care what you do for them? Where’s the love in that? I can make it all go away: the pain, the agony, the suffering and dying. All the power and authority and glory in this world, it’s mine. It will all be yours, just bow down to me.” Jesus answered him, “It is written: ‘You shall worship the Lord your God and serve him only.’” Resting in his Father’s Word, Jesus punches back: “Liar.”

Satan wasn’t ready to throw in the towel. He takes Jesus to the pinnacle of the temple. With one last uppercut he says, “So I see you trust and worship this Father, but if he’s really worth such trust and worship then there’s nothing wrong with putting that trust to the test. He promises to protect you, doesn’t he? Time to see that, Jesus, don’t you think? Throw yourself down and let’s see him send his angels to help you for a change instead of watching you suffer.” Jesus answered him, “It says: ‘You shall not test the Lord your God.’”  Resting in his Father’s Word, Jesus punches back: “Liar.”

Wouldn’t it be awesome if you and I could say that, resting in our Father’s Word, we had always punched back at the devil with his rightful name, “Liar”? Wouldn’t it be awesome if we had a record of perfect battling on the field of temptation so that Satan was always fleeing us, defeated, his lies, like his head, helplessly crushed by God’s truth?

Friends, we do have that record! Jesus didn’t fight and win these battles for himself. His entire life, he endured the attacks of Satan and, as Luther says, he held the field for us. He held the field so that he could give us his righteousness. He withstood every temptation so that his perfect life could be offered for us. That’s the glorious truth that we hear every first Sunday in Lent. Lent is a time when we focus on the journey Jesus made to the cross. And while the price Jesus paid on the cross was necessary, it wouldn’t have mattered if his life wasn’t perfect. Jesus’ journey to the cross is just as important as dying on the cross itself. On that journey Jesus never, ever sinned. He perfectly obeyed, perfectly loved, perfectly trusted his Father. He never doubted his Father’s love, never fell into Satan’s plot to think selfishly, never sought an easier road that would have taken him away from the cross. Jesus defeated temptation in his life and his death to bring us deliverance.

The season of Lent is wonderful because Lent doesn’t really tell us what to do. Lent tells us what has been done. Lent doesn’t give us a list of instructions to follow. Lent shows us Jesus who’s done it all. Lent shows us our sins that have now been forgiven because Jesus held the field. Lent reminds us that even death has been defeated and heaven is secure for us. Lent shows us in one finished event that the devil’s greatest lie is just that, a lie. Lent shows us that God most certainly loves us. Jesus’ life and death prove it.