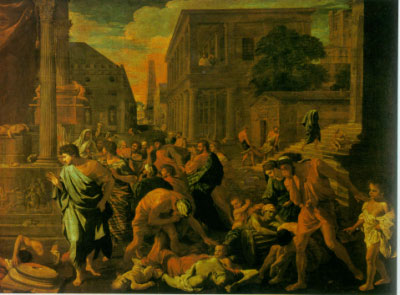 King David sinned again. The man “after the Lord’s own heart” showed, yet again, just how unlike the Lord he truly was. Though this particular sin might not be as well known as his encounter with Bathsheba, it was even more deadly.

The Lord had delivered enemy after enemy into David’s hands. Just scan the chapters that precede 1 Chronicles 21 and you’ll see a daunting list of David’s dashed foes. The Lord had kept the promise He made to Abraham that a great nation would come from his family. The Lord reaffirmed that promise to the generations that followed and now, under David’s kingship, Israel was one of the most powerful nations in the world. And David knew it. What David forgot, however, was that all of Israel’s success and power came because the Lord fought for her, not because of David’s military prowess.

But pride is a hell of a thing. It takes all of the beautiful blessings God showers upon us and pats ourselves on the back for acquiring them. David wanted to know how vast his awesome army was. So he had his general, Joab, count Israel’s fighting men. Joab tried to talk David out his request, knowing that it stemmed from pride and would incite the Lord’s anger, but what was his word against the king?

The numbers Joab reported back were staggering. Though Israel was only one-fiftieth the size of present-day U.S., Israel’s army was roughly the same size as our current active military. Though the numbers were staggering, the request was still sinful. And, again, David knew it. He confessed to God, “I have sinned greatly by doing this. Now, I beg you, take away the guilt of your servant. I have done a very foolish thing.”

In response to David’s confession, the Lord employs a little ‘love and logic’ parenting with David, giving him three options from which to choose as a consequence for his actions: 1) three years of famine, 2) three months of being defeated by his enemies, or 3) three days of enduring “the sword of the Lord.”

David went with option three and chose to roll the dice with the Lord, rather than take his chances with his enemies. Here’s what that would mean for Israel: a deadly plague that wiped out 70,000 men in Israel. In addition, the Lord sent an angel to destroy Jerusalem.

In a dramatic moment, as David sees the angel of the Lord standing between heaven and earth towering over the city with His sword drawn to destroy it, David cries out: “Was it not I who ordered the fighting men to be counted? I am the one who has sinned and done wrong. These are but sheep. What have they done? O Lord my God, let your hand fall upon me and my family, but do not let this plague remain on your people.” Essentially, David was saying, “It’s not fair that someone else suffers for my sins!”

On the cross, Jesus once again stands between heaven and earth but this time it is to suffer the sword of the Lord, not wield it. He stands between a righteous God and a fallen creation to endure all of God’s just anger over sin. He dies that you might live. He lives that you might never die. No, nothing about that is fair. God never intended it to be fair. And thank God for that.