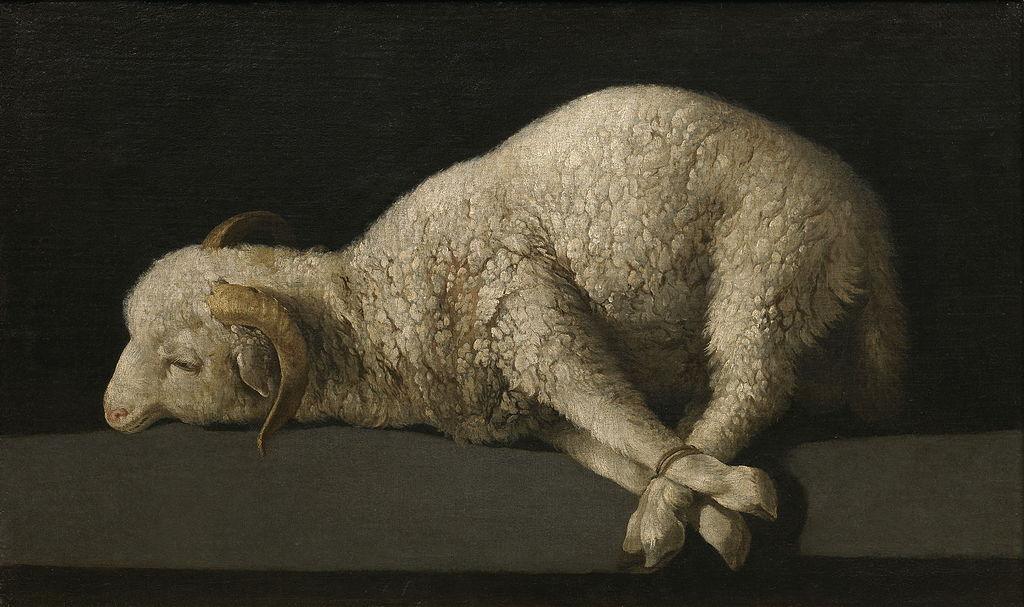 They were people on the move. The bags were packed, the kids were dressed, shoes were tied. This was the pilgrim’s meal as they set out for the Promised Land. No one travels on an empty stomach. And so, with their robes tied to keep them from tripping on the long road to God’s country, they ate.

They were people with death hanging over their head. Death prepared to aim its bony finger at those not guarded by blood, and so they painted the lamb’s blood on their doorposts. Those who came in and those who went out would be people saved by the blood of the lamb. They ate the life of another as they prepared to escape death.

They were people heavy-laden with trepidation and anxiety. Everything was happening all at once. They had been oppressed for so long, and now deliverance was coming, and coming quickly. Their minds raced and their hearts beat like racing drums. And so they sat down to give thanks and feast on hope. They would be people of hope, even in the midst of danger.

They were chosen people, members of the Family. They had not chosen their Father. He had chosen them. They had not sprouted from the Family Tree. He had grafted them in. They were adopted, but they were the Father’s children nonetheless. And so they ate the Family Meal, which would become a Family tradition to remember the Family’s unique heritage.

They were people with blemishes, lots of them. There was much of which they were ashamed. There was much too make them seem slight in the eyes of the world. They had more mettle than muscle, less a swagger than a shuffle. Their sins were hardly hidden. Their groaning was hardly under their breath. They were people with blemishes, lots of them, and so they had to hunt through the herd for a substitute, a perfect lamb, a victim to take their place to win their pardon.

And things haven’t changed. The New Testament did not replace the Old. If fulfilled it. It expanded it. It explained it and perfected it. The New Testament isn’t even new. It was always there, hidden in the Old, waiting for the Upper Room, for the Cross, for the Tomb. And so, when Jesus, the Lamb of God, took the bread of the Passover meal, blessed the cup of the Passover meal, and gave thanks, and gave it, and told them to eat and to drink, He wasn’t ending the Passover, He wasn’t instituting a new Meal; He was fulfilling and perfecting the Passover, He was preparing and serving the Meal as it was always intended.

We are a people on the move. We are pilgrims, fellow passengers in the ark of the Church, traveling through life to Life. We wear the robe of Christ’s righteousness, but always tucked into the belt of truth, ready to depart at the Lord’s bidding, eager to arrive in God’s country, the Promised Land. But no one travels on an empty stomach. We eat pilgrim’s food, heavenly food and drink, to sustain us on the road to heaven. We partake of Heaven itself on our pilgrimage to heaven.

We are a people with death hanging over our head, with only Blood to keep it at bay, coming into this house and going out as people of Blood, people of the Blood of the Lamb of God who takes away the sin of the world. As death aims its bony finger at those who walk unguarded, we follow the resolute finger of the Baptist sent to prepare the way, fixing our eyes on the Baptized Son of God on whom the Spirit rests. And so we eat the life of another as we prepare to escape death, the life of the Crucified but Living, the life of Life Himself.

We are a people heavy-laden with trepidation and anxiety. Everything often seems happening all at once. Long oppressed by sin and death, our deliverance is here, and our minds race, and our hearts beat like racing drums. And so we sit down and feast on Hope in the midst of danger. We savor the Guarantor of Victory even as the battle begins, even as the battle ensues.

We are a chosen people, members of the Family of God. We have not chosen our Father. He baptized us. We have not sprouted from the Family Tree. Christ has grafted us into His Cross. We are adopted, but the Father’s children nonetheless. And so we eat the Family Meal, a Family tradition to remember our Family’s unique heritage, to commemorate the death and life of our heroic Brother.

We are people with blemishes, lots of them. There is much of which we are ashamed, much to make us seem slight in the eyes of the world. We have more mettle than muscle, less a swagger than a shuffle. Our sins are hardly hidden. Our groaning is hardly under our breath. We are a people with blemishes, lots of them, and so we have to hunt through the herd of humanity for a substitute, a perfect Lamb, a Victim to take our place to win our pardon. And, by God’s grace, we don’t have to find Him; God sent Him. He has been offered. His Blood marks our doors. His Death is our Life.

And we want it to be ours, don’t we? So God puts it in our mouths. He pours it down our throats. He wants it to be part of us. He wants us to be part of Him. He wants us not only to have His Son, but to be His Son, to be His sons and daughters. How can we not hunger for such a Meal? How can we not gladly observe such a Tradition? How can we not zealously look forward to such a Feast? Here is Heaven on a plate. Don’t be a fool. Run to it. Run to it as often as it is offered. Want it offered more often than it is. If this is what He says it is, if this is what it always has been, who wouldn’t gladly spend an eternity at the altar, who wouldn’t easily grow a belly that would never grow full of such grace?