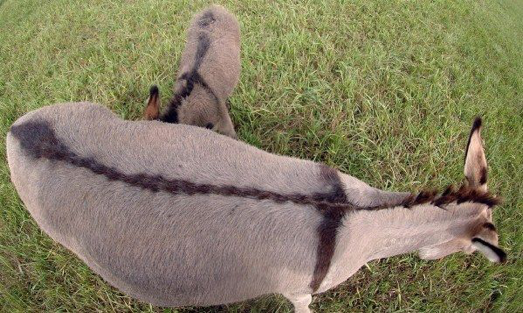 “Look! A cross!” These three words came from the mouth of a seven-year-old girl.  A couple of years ago, my wife and I took a short trip to Custer State Park in South Dakota. We had some company. Our goddaughter and her family went with us. While there, we visited its famous burros. These burros are descendants from the group of donkeys that used to give rides from the Sylvan Lake Lodge to Harney Peak. As time and technology progressed, the need for donkey rides ceased. The owners then let them loose in the park.

If you have ever seen them, you know the excitement they bring the tourists. It’s the one animal park rangers are ok with visitors feeding. They stop traffic. They slobber all over your car. And that slobber can even make its way into your car as these friendly animals are not afraid to stick their heads into your vehicle. We didn’t want the slobber in our car, so we got out. As we did that, we wanted our goddaughter to experience feeding one of these donkeys. We didn’t want her to get kicked or bit. I served as a human shield and we proceeded to go towards the other tourists. There was a colt with its mother. They were standing by themselves. As we approached them with our carrots, this shy seven-year-old said something. I missed what she said.  (Note: My height served as an obstacle from hearing her the first time.  I stand a little over six-and-a-half feet.  She was just over three feet.) Not wanting her to get frustrated, I asked if she could repeat what she said. Then I heard it.  She said, “Look! A cross.” I scanned the terrain and I was not able to see one. I thought maybe there had been a roadside cross marking a fatality, but I couldn’t find one. I wasn’t seeing the cross. She repeated, “Look! A cross.” I kept looking. We wanted a content rider with us so I finally said, “I can’t see it. You will have to show me.” While still hiding behind my leg, she said, “There. And there. And there. And there. And probably some over there (pointing to the traffic jam of cars).” She was directing my eyes to the donkeys.  Still not understanding I asked, “You mean the donkeys?” She quickly said, “Yes! The donkeys. Look at their backs. Did you know that a donkey carried Jesus into Jerusalem where he would die on a cross for our sins?” So, I looked and sure enough, the darkened hair that goes along their spines and over their shoulders is in the form of a cross. Wisdom from the lips of a little child!

With Holy Week upon us, as we move from palms to crosses, that conversation works as a good segue into our devotion today. “Look! The cross!” The words in Hebrews today remind us of that gruesome encounter our Savior undertook so that he could defeat our enemies of sin, death, and the devil. They tell us why Jesus willingly went and died on the cross. He did it to set us free from slavery to those enemies. He shared in our humanity to correct the mess caused by the devil in the Garden of Eden. The offspring of the woman would suffer and die. In doing so, he would crush the devil.

We aren’t on an extended weekend getaway to the Black Hills of South Dakota. Instead, we are walking down the path connected to Holy Week. As we walk down that path, we visit the shouts of Palm Sunday (along with a donkey), the night where Jesus instituted the Lord’s Supper, the betrayal and desertion of his disciples, the mockery and unjust actions of both Jewish and Roman leaders, the brutality of the Roman soldiers, the crucifixion, the abandonment of Jesus’ heavenly Father, the point of where Jesus breathed his last and died, and where his friends saddened by his death would place him in a tomb.  This last week of his life begins with a donkey ride. It’s not one that would take a tourist to a high point for a scenic view of South Dakota. It’s a ride where Jesus is carried into town so that he can carry the sins of the entire world upon his shoulders as they were extended upon the cross. Death would not hold him as three days later he would show his victory over death as he rose from the dead.

As you  continue to make your way through Holy Week, may the illustration of the donkey’s back direct your eyes of where your Savior is goes. He goes to the cross. You have an illustration from a little child. She pointed to the backs of donkeys and said, “Look! A cross!” She then repeated the gospel message that was told to her as her instructor made a connection with a donkey and what our Savior came to do on the cross.  May that serve as encouragement to parents and those who instruct little children about our Savior to continue to do so faithfully. With Holy Week, we can think of those children who repeated the prayer of “Hosanna,” “Save us now,” from Palm Sunday and spoke it in the Temple area the next day.

Since our little trip to our west, it’s become a habit to check out donkeys/burros when I see them. With each one I see (whether in the wild or at a zoo or farm or even on TV), each one has had that darkened hair in the shape of a cross. Having heard Palm Sunday readings from Zechariah and the Gospels, I hope the illustration from the donkey helps make a connection to help you as you look and see that cross of our Savior.