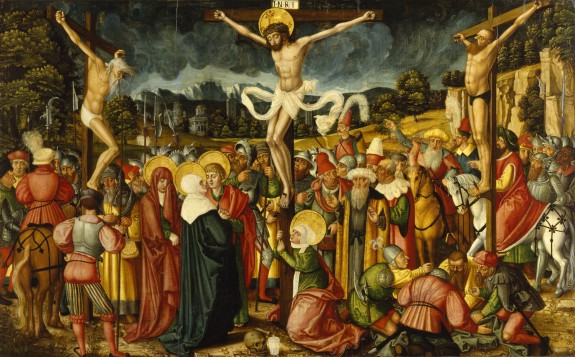 One word. One word in the Greek language that sums it all up, tetelestai. It means “it is finished.” It is the word Jesus spoke on the cross announcing to the world, to His people, and to His devilish enemies that His mission was accomplished. One word that means everything to us weary souls. It is finished. It is paid for. Heaven is secure. Now hope can reign. One word, tetelestai.

Two natures. Two natures of Christ are in this one person Jesus: human and divine. What a strange mixture that isn’t a mixture! What a strange combination that isn’t a combination! He is 100 percent truly divine and 100 percent truly human all at once. It is mysterious. It is mysteriously gracious. He had to be true man to actually live and die in this flesh. He had to be true God to live and die perfectly for our salvation. So God died. So God died that day. Think about that: God died. God died for you! Two natures of Christ.

Three persons of the Trinity groan at this event. The Father groans. Can you imagine the Father watching His one and only suffer so much? Can you imagine the groans? The Son groans too. He goes uncomplaining forth as a lamb to the slaughter, innocent but not naive. He knows what is coming. He knows He has to do it and He groans. The Spirit groans too, groaning groans that words cannot express. The Spirit also proceeds from the Father and the Son to teach you all of these things about the cross. He proceeds so that you never forget this moment of grace. Three persons of the Trinity groaning.

Four legs. Four legs are broken that day, two each from the thieves who flank the God-man. Four bones cracking in the absolute horror that is mankind’s evil. How jaded do you have to be to break the bones of a dying man just to make your job end quicker? Four legs showing us that we really are a rotten human race.

Five wounds. Five wounds on the body of Christ. Two hands, two feet, and one side. Five places where foreign metal was inserted into the body, not to help but to harm. Five wounds that we will never forget. Five spots wounded in our place and for our salvation. Five wounds.

Seven words. Seven words did our Savior speak from the cross. He asked for a drink and He got wine vinegar–more bitterness for a suffering man. He spoke compassion to His mother and to John, “Here is your Son and here is your mother.” He pleaded for grace for His captors, “Father, forgive them; they do not know what they do.” He spoke grace to the thief, “Today you will be with Me in Paradise.” And He spoke grace to us. “It is finished, tetelestai.” He spoke agony, “Why have You forsaken Me?” And He spoke relief, “Father, into Your hands I commit My spirit.” Seven words did our Savior speak.

Six days we labor on this earth before our heavenly Sabbath rest. Six long days. But our burden is light because our Savior suffered for six hours, six long hours. Your burden is light because you have His grace. You can suffer through it, you can. He will never give you more than you can handle, as we say,  but please do remember He will almost always give you everything you can handle. They are six long days but they are ultimately days of joy and peace because of Christ. Six days, six good days.

Five wounds. Five wounds still haunt us and still lift us up. Five wounds of Christ remind us of our sin but also of how precious we are in His sight. How far He was willing to go so that we could have life! He was pierced for our transgressions and our salvation. Five wounds, five wounds we carry around in our hearts.

Four corners. Four corners of the earth, that’s where this message goes. Almost everybody knows this; everybody needs to know this. This is the most important event in the history of the world. God died this day and He did it for His creation. And everybody is included. He died for sacrificial love. All four corners of this earth.

One God. One God speaking one word which sums it all up: tetelestai. It is finished. One word from one God says it all to our tired hearts. One God who was always there working in the Old Testament, working in the New, preparing this sacrifice for each and every individual. One God who was forgotten about and spoken against and taken advantage of and despised and afflicted. One God who still had the patience and the mercy it required for forgiveness. One God speaking one word. One simple, eloquent, earthshaking, life-changing, eternity-securing word. One beautiful word. Tetelestai. It is finished.